Home Shopping Bulk, the association that allows everyone to eat well at low prices

Bulk, the association that allows everyone to eat well at low prices

Cécyle, a 58 -year -old writer, advances with her white cane.Immediately, a person comes to greet her and accompanies her to fill his shopping cart.“I have the disabled adult allowance, 902 euros per month.But I believe that food is part of my health, so I try to be creative.I cook a lot, I go to Lidl, Too Good To Go. And I appreciate accessing good products at reasonable prices, "she explains.

Cécyle is one of the bulk members, for "to a joint purchase network".As its name indicates, this association develops purchasing groups, in order to democratize access to quality food products.

Founded in 2013, the association today helps more than 3,500 families, or nearly 10,000 people in 56 shopping groups, installed in working -class neighborhoods of 13 major French cities.Often in popular education structures or in social landlords.

“9 million people benefit from classic food aid in France.Often unsold distribution and poor quality products.This system does not contribute to sustainable food and agriculture.Here, on the contrary, we support quality production ”, argues Lorana Vincent, coordinator of the national network.

Who points to another difference with classic food aid: “At BULD, network members can choose what they want to consume.And they pay.They keep their dignity ”. 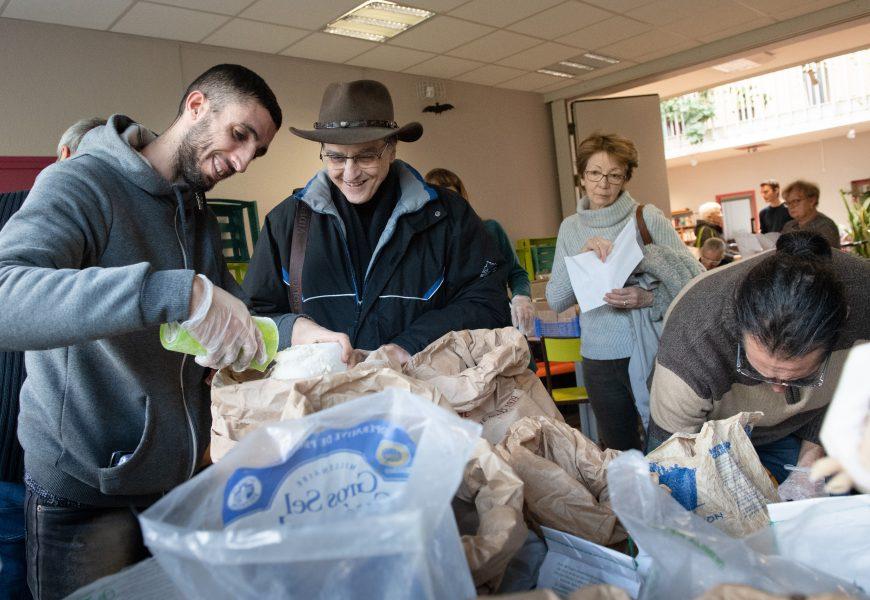 Essential for Nathalie, 58, mother beneficiary of the RSA after a career in events.“I went once to a distribution of the Red Cross.I waited two hours in the cold then I was called by my last name.I was so ashamed.Here, the team is available, benevolent, not in the pathos, ”she slips.

Concretely, households choose once a month what they need from around fifty products offered.Starchy foods, legumes, dried fruits, cleaning products, some processed products, and fresh depending on producers in the territory.Online or during permanence for those who are not connected.Two weeks later, they come to collect their order in an ephemeral grocery store.

A system made possible by grouped purchases and short circuits, which reduce costs a little."But we are not putting pressure on partner producers so that they lower their prices," said Lorana.Above all, the products are sold at a cost price.The association therefore does not make a margin.

Read also: how the pandemic accelerates the creation of new short food circuits

An association open to all

It was in Lyon, in 2013, that the idea germinates.The founder of Vrac, Boris Tavernier, then holds a cooperative bar launched with local producers.There, often come to lunch the regional official of the Abbé Pierre Foundation, and the general manager of the HLM organization is Métropole Habitat.From their discussions on precariousness, housing and food will be born the BULS association.

Who can participate?The association is open primarily to people with modest incomes, in a situation of isolation, or tenants of the social park.But, in a spirit of diversity, everyone can ask to enter it, for an increase of 10 % and an annual membership of 30 euros.The system has also extended to universities, in Lyon, Rennes, Strasbourg ...

To read also: Soon a social security of food?

Bulk, a spirit of popular education

Each member is also invited to give time to the project, commensurate with their availability.For example for distribution, or for animations.Because the association also organizes meetings with local producers, cooking workshops.Recently, BURRA Paris thus offered a “Safran picking” outing on a roof and a cooking competition."The idea is not to teach people to cook but to make from rich and numerous know-how of the inhabitants, in a spirit of popular education," explains Aline Di Carlo, director of Buli Paris.

"At my age, I'm not going to make the revolution, but through bulk, I feel like I'm trying to change the world a little.Here, members are not put in a situation of failure, they are also actors.We feel a member of a collective project, ”says Cécyle, ending her shopping.

A great initiative therefore, notably winner of the "La France is committed" Foundation Prize.However, it remains to consolidate its economic model.For the time being, 35 bulk employees are paid thanks to public and private subsidies, increasing due to the recovery plan.This should allow the network to gain momentum.The concept will soon be exported to Belgium.And the number of purchasing groups should double the 2022.

Share the publication "BURRAC, the association which allows everyone to eat well at low prices"