Roger, a retiree from Toulouse realized that he had been "overcharged", but too late: he had already initialed the order form for his future car (in June) and made the payment (in September). Although informed (like any faithful reader of Auto Plus), he let himself be carried away by the joy of buying a new car and by the professionalism of the salesman.

And he ended up signing the document presented by the salesperson straight away, without asking for any discount (a must!), or information other than that on the coveted Citroën C3 Aircross. It was only once his vehicle had been delivered and the order form had finally gone through that he was concerned to see an amount of €846 opposite the “Other costs” line! Many of you are thus relieved of several hundred euros for obscure or virtual services. A common and abusive business practice, which allows sellers to make ends meet. Follow our advice so that you no longer let yourself be "fleeked" without batting an eyelid during your next acquisition. Photo credit: Adobe Stock

"Roading costs", "Additional costs", "Registration/administrative costs" or even "Provision costs": whatever the title chosen, the seller does not generally dwell on the or the lines concerned, or remain very evasive about it. And the customer, focused on the price of the car, tends to skim over this information. Problem: these “services” are invoiced at least 200 to 250 €, for a service that is at best overpriced, at worst non-existent, and in most cases optional! Let's take the case of Roger again: he was twice scammed, since he paid €536 for “starting costs” (without further details), plus €310 for “provision with fuel”. Another example: Philippe, from Charleville-Mézières (08), paid 350 € at Toyota for a “Delivery Pack”, presented as compulsory, without the slightest detail. Scandalous, because most of the services that these packages are supposed to include are already included in the price of any new vehicle. Indeed, the decree of June 28, 2000 stipulated that the selling price included "the cost of transporting the vehicle to the dealer or retailer, preparing the vehicle for the road (polishing, stripping, level control including 5 liters of fuel) and the supply and installation of a set of permanent registration plates". If it has since been repealed, you can still use it to negotiate the costs and above all you must first ask for the details of the costs charged. Firmly refuse to pay for anything that doesn't have to be, or anything that appears to be excessive ancillary expenses. The salesperson says he has no choice? Demand that he compensates by offering you an equivalent discount. Otherwise, look elsewhere.

In general, the seller makes the request for a gray card (CG) directly online. The only costs that you are then required to pay are the taxes due to the State, the main one of which is calculated according to the number of fiscal horses, and the costs of managing and sending the document to your address (4 € and 2 ,76 €). For the rest, it is not shocking to pay a maximum of €30 for the service of the online certificate request by the seller (knowing that it only takes a few minutes), as in a car center. You can also carry out the process alone, but going through a professional remains more comfortable because the official site Ants.gouv.fr still sometimes has malfunctions (Making a registration request alone is only done on the internet, the dedicated services in the prefectures and sub-prefectures having been closed on November 6, 2017). 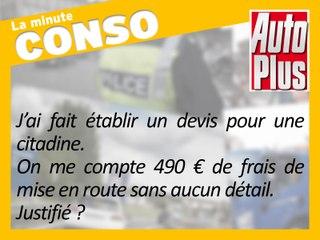 Another classic case of forced sale. Insurers require you to have your windows engraved, you are told? False (only a post-flight geolocation system is sometimes imposed to cover a sports or luxury model)! So you have a choice. This practice has less interest today, because the thugs manage to erase or falsify the engraving. By refusing this service, you save at least €150, plus an annual subscription which is generally never mentioned at the time of purchase.

If all the sellers do not claim it, it is customary to pay a 10% deposit with the order. Nothing prevents the salesperson from asking you more, but it is better to refuse. Because if the pro files for bankruptcy, or if you cancel the sale (for a reason other than late delivery or failure to obtain credit), you will lose big.

We often forget it, but the purchase order is a real contract concluded between two parties. Affixing your signature commits you to respect it (idem for the dealer). So, beware! Never sign too quickly or with your eyes closed. Afterwards, it is very difficult to go back. The withdrawal period granted by law is only 14 days, and only applies if you take financing on credit and it is stipulated on the order form, or in the case of a purchase at distance or door-to-door canvassing. So take the time to dissect this document, even if you are rushed, if the dealership is going to close, etc. Several thousand euros are at stake and it is almost impossible to negotiate after the fact, except to come across a very accommodating seller.