Home LIFE TIPS Barbecue and plancha: which gas and which bottle to choose?

Barbecue and plancha: which gas and which bottle to choose?

The barbecues and planchas operating on the gas are very practical.They do not require an extension between the terrace of its garden and an electrical outlet of its interior.Then, gas cooking is faster than electric cooking, and the heat is distributed evenly so that meats, fish and vegetables are perfectly cooked.

Which gas cylinder to choose for a barbecue?

Butane or propane for a barbecue?

Butane and propane are both adapted to the gas cooking of a barbecue.Indeed, even if the butane gas does not resist negative temperatures, it is rare to light its barbecue in winter.

As for propane gas, it only freezes when the temperature reaches -44 ° C.Both LPG can therefore be used without problem to supply a gas barbecue, as long as storage is done outdoors (it is prohibited to store a propane bottle indoors).

What bottle size to choose?

The choice of the size of the gas cylinder depends on the desired advantage:

If they are light and ideal for transport, small gas cylinders may not be powerful enough to supply a barbecue.On the other hand, Campingaz bottles are dedicated to intensive uses and therefore to barbecues and planchas (the R907 in particular).

Where to buy a gas bottle for my barbecue? The gas cylinders are sold in the usual outlets, that is to say supermarkets, grocery stores and service stations.There is also home delivery everywhere in France with the gasissimo by Antargaz service (-6 € with the SELGA6 code).

The price of a gas cylinder depends on its brand and the model.If the price of the consignment of the bottle is fixed by the supplier, that of the gas recharge depends on the point of sale.

It is therefore difficult to precisely compare the price of the cylinders at the level of the gas load.Here is nevertheless a selection of barbecue gas cylinders and their prices. 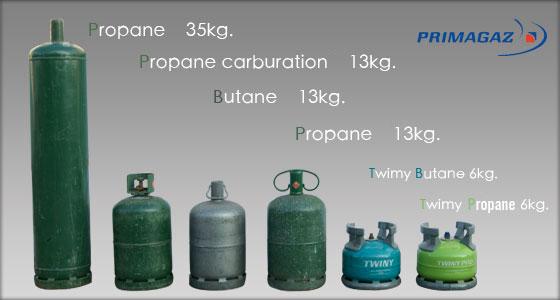 Guests who warn a little late for an improvised barbecue? Gazissimo by Antargaz delivers gas bottles during the day everywhere in mainland France if the order is made before 11 a.m., otherwise the next morning (except Sunday).The Selga6 promo code allows you to benefit from € 6 discount on its order: 🚚 Order my bottle

How to connect a gas cylinder to a barbecue?

Most gas barbecues include compartments to store its gas cylinder.To connect the barbecue bottle, just bring a regulator (pressure regulator), suitable for the type of gas from the bottle, 30 mbars as well as a flexible connection dedicated to the gas used (Propane or Butane).

If the barbecue is equipped with a threaded connection, it will also be necessary to have an adapter for threaded nipple in order to connect the connection hose.The gas regulator is often supplied to buy a gas barbecue but it must be checked that it is well suited to the gas bottle used.We must also think of checking the validity date of the connection hose (10-15 years on average) before each use.

What type of gas cylinder for plancha?

The gas plancha heats up in just a few seconds, and the heat spreads homogeneously over the entire board.So as for barbecue, it is certain that food, arranged on the plancha, will be well cooked from one end to the other.In addition to ensuring a really uniform cooking, the plancha has a more practical appearance than the barbecue since it is transportable.So it is easier to put it away after using it, but also to wash it.

Make care to clean the cooking residues well;Studies show that the production of polycyclic aromatic hydrocarbons (HAP) is four times higher on a barbecue or a unbked plancha after five cooking.

As is the case for barbecues, the choice of a gas bottle for plancha can be made among the butane or propane.The only difference is storage since the butane must be placed indoors or outside if the temperature is greater than 0 ° C while the propane will always be outdoors.

For the choice of the size of the gas cylinder for a plancha, it is possible to opt for a smaller bottle than for a barbecue.Again, if the consumer wants to use the plancha regular and intensively, it will be necessary to favor a larger gas cylinder (10 kg) and if a small case (from 2 to 6 kg).

Choosing a small gas cylinder rather than large is not necessarily more economical since the price of the instruction is generally higher.In addition, you should know that Campingaz bottles are not recorded but sold, which is why the price of the first purchase is high.They are adapted to most devices and especially those of the Campingaz brand.

What advantages at a gas barbecue?

There are three types of barbecues:

The latter is the most used by the French, followed by the electric and finally the gas barbecue which would represent only 12% of the devices possessed (according to an OpinionWay survey for Campingaz).

However, gas cooking has many advantages, it is also the privileged solution by great gastronomic chefs.In addition, the connection of a gas bottle to a barbecue is simple and economical.

The advantages of the gas barbecue are as follows:

What is the difference between propane and butane?

Propane and butane are both LPG (liquefied oil gas), petroleum derivatives.However, there are some differences between butane and propane:

What is the instructions for a gas bottle?

When you buy a bottle for the first time, the reseller is paid for the consignment.This corresponds to the amount of the loan of the bottle by the supplier to the customer.The consignment system prevents bottles to be thrown into the wild.

Once the customer has emptied his bottle, he can exchange it for an identical by paying only recharge or restore it definitively (to change models for example).In this second case, it is refunded from the initial instructions.

Even if you are not sure to obtain a refund, it is essential to restore your empty bottle in a point of sale so that it is recycled or reconditioned.

What advice for the purchase of a plancha